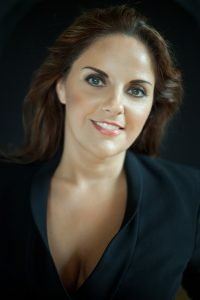 Celine Byrne is a lyric soprano from Kildare, Ireland. She received her Masters in Music from the Royal Irish Academy of Music in 2007, where she studied with Dr. Veronica Dunne, also receiving the RIAM award for outstanding achievement. In addition she has an honours Music Degree from the Conservatory of Music and Drama, Dublin, where she was awarded the college Gold Medal for excellence. She has received coaching at the National Opera Studio of London and has studied with Christa Ludwig at the Vienna Staatsoper.

In 2007 Celine was awarded the First Prize and Gold Medal at the Maria Callas Grand Prix, Athens. Other awards include the Margaret Burke-Sheridan Gold Medal in 2009, the William Young Prize at the Veronica Dunne International Singing Competition, Dublin 2007 and the ‘Brabants Dagblad Press Prize’ at the IVC International Singing Competition in s’Hertogenbosch, The Netherlands.

Celine is now recognised nationally and internationally as one of opera’s great stars. A performer of ‘fine lyrical quality and a touching actor’ (Opera Magazine), Celine made her operatic début 2010 singing the role of Mimi in La Bohéme. By 2012 she was to be heard at the Royal Opera House, Covent Garden in the lead role of Dvorak’s Rusalka which she took over at very short notice. Soon afterwards she was invited back to sing 1 Blumenmädchen in Parsifal followed by Micaela in Carmen and, in the seasons that have followed, she has performed extensively throughout Europe as well as in the United States, China, Russia and Mexico.

A frequent concert performer, Celine is very familiar to both Irish and international audiences and has also performed with world-renowned tenors José Carreras, Roberto Alagna and Joseph Calleja. Future engagements include concerts with Josè Carreras in Europe, China and Russia and a concert with Marcello Alverez in October in Thailand at the Bangkok Festival of Music and Dance. Celine has also performed in concert with Bryn Terfel and recently sung with him accompanied by the Borusan Philharmonic Orchestra conducted by Sasha Goetzel. Recent concerts include Richard Strauss’ Vier Letzte Lieder in Austria, a recording of Verdi’s Requiem with the Prague Radio Symphony Orchestra conducted by André Lenard and a concert with The Sun Valley Summer Symphony in the America.

This season Celine is due to perform Mimi in La Bohéme with Irish National Opera, Micaela in Carmen with Opera Kansas and Liu in St Margarethen and at The Royal Opera House, Covent Garden. Due to the Corona Virus many performances have been cancelled and future performance are not yet confirmed.

This website uses cookies to improve your experience while you navigate through the website. Out of these, the cookies that are categorized as necessary are stored on your browser as they are essential for the working of basic functionalities of the website. We also use third-party cookies that help us analyze and understand how you use this website. These cookies will be stored in your browser only with your consent. You also have the option to opt-out of these cookies. But opting out of some of these cookies may affect your browsing experience.
Necessary Always Enabled
Necessary cookies are absolutely essential for the website to function properly. This category only includes cookies that ensures basic functionalities and security features of the website. These cookies do not store any personal information.
Non-necessary
Any cookies that may not be particularly necessary for the website to function and is used specifically to collect user personal data via analytics, ads, other embedded contents are termed as non-necessary cookies. It is mandatory to procure user consent prior to running these cookies on your website.
SAVE & ACCEPT